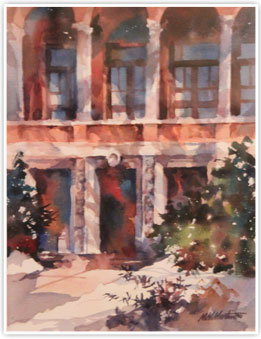 On the evening of November 20, 1894, Delaware Avenue just north of Allen Street was clogged with carriages and horses, and the sidewalks crowded with ladies and gentlemen making their way to Number 595, the former site of the Delaware Avenue Baptist Church. The ladies, many of whom arrived in plumed and feathered hats, wore long dresses of satin and velvet decorated with lace and brocade and adorned with necklaces of pearls, diamonds, and rubies. Inside, a grand social event was already in progress.

The occasion was a reception marking the formal opening of the Twentieth Century Club. More than one hundred and forty club members welcomed the guests, among whom were some of the most distinguished citizens of Buffalo. An orchestra played behind potted palms while a Rochester caterer served refreshments in the dining room amid red shaded candles and great bouquets of chrysanthemums. Guests wandered through the new clubhouse inspecting the rooms and remarking on the astonishing transformation achieved by Green and Wicks, the prominent Buffalo architects who redesigned the former church to accommodate the needs of the club.

Somewhere in the center of that glittering evening, welcoming the guests and overseeing the details of all that transpired, was the calm, capable presence of Miss Charlotte Mulligan. Miss Mulligan, a music teacher and music editor at the Buffalo Courier Express, founded the Twentieth Century Club and served as its president for the first four years of its existence. In an age when women were politically disenfranchised and seldom stepped out of their prescribed social roles, Charlotte was a mover and shaker.

Charlotte Mulligan was a graduate of the Buffalo Female Academy, forerunner of the Buffalo Seminary, and president of the school’s Graduate Association. In addition to her regular teaching and editorial duties, Miss Mulligan formed an organization called the Guard of Honor comprised of young working class boys to whom she taught writing, arithmetic, geography, reading, music, and manners. She worked quietly behind the scenes to improve the lot of the poor, the incarcerated, and the mentally ill. Charlotte understood the frustration of social strictures for those not born white, male, and privileged, and she envisioned the Twentieth Century Club as a place that would “create an atmosphere where individual gifts would flower.” The Club actually evolved from the Buffalo Female Academy’s Graduate Association’s need for a new building after their Johnson Park facility became too small. Miss Mulligan found the Delaware Avenue Baptist Church building and it was purchased with the funds of the Graduate Association. After the purchase, it was decided that a new club, open to women from outside the Association, was needed. This new club became the Twentieth Century Club and the Graduate Association continued as a separate entity until 1997.

During the late 19th century, a women’s club movement was gaining momentum throughout the country. Many clubs began as cultural organizations to provide middle and upper class women with an outlet for their intellectual energies. By 1906, there were over 5,000 women’s clubs in existence working towards social goals like women’s suffrage, an end to child labor, and the passage of the Pure Food and Drug Act.

For Miss Mulligan, however, the Twentieth Century Club represented something quite different. She wanted the club “not to share in current controversies, but to feed those springs of perception and that sweet reasonableness of the soul upon which the right solution of controversial questions depends.” To that end, the avowed purpose of the club was to advance the interests of education, literature and art. Its motto, emblazoned on the club crest, could serve as the epitaph for its founder: Facta Probant (Let Deeds Tell). Charlotte Mulligan died in 1900.

If there was ever any doubt that the Twentieth Century Club would be a vital force in Buffalo society, it was quickly dispelled during the first decade of its existence. By 1895 it was already apparent that the club would need larger quarters to accommodate its burgeoning membership and its ambitious calendar of social events. Once again the firm of Green and Wicks was engaged, this time to erect a new clubhouse that would incorporate the current clubhouse in its design. This is essentially the Twentieth Century Club that stands today, over 100 years later.
Green and Wicks created an elegant three-story building designed with great dignity and charm. Built on grand old Delaware Avenue, once Buffalo’s street of dreams, the Twentieth Century Club is a bel canto aria to space, light, decorative art, and classical decorum. The Indiana limestone and pressed brick façade is balanced by graceful terra cotta cornices and blue marble Ionic columns on the second story, while the wrought iron side entrance gates are echoed in the intricate grillwork on the third story. The whole effect is pleasing, harmonious, inviting, and perfectly proportioned.

In 1901, the Pan American Exposition brought the world to Buffalo and the Twentieth Century Club opened its doors to many of the city’s most celebrated visitors. Receptions were held for Vice President and Mrs. Theodore Roosevelt and their daughter Alice; Governor and Mrs. Benjamin Odell; Mr. and Mrs. Booker T. Washington; and the Chinese Minister, Wu Ting Fang. The wives of foreign diplomats visiting the Exposition were entertained at a special dinner and a gala ball was given for the Corps of Cadets from the U.S. Military Academy. The club graciously extended membership privileges to Mrs. Roosevelt and Mrs. McKinley.

In 1999, for the first time visitor to the Twentieth Century Club, the experience is closely akin to time travel. At the front door, the visitor is greeted by a member of the staff and welcomed into a pleasant foyer. A small reception room off the foyer is available for a brief chat before ascending the curved double stairs up to the Court, a magnificent light-flooded atrium where marble replicas of Florentine “choirboys” gaze down from the upper walls. The sculptures illustrate Psalm 150 and were made for the Cathedral of Florence in the fifteenth century. A cozy library opens off the Court and contains an impressive collection of first editions, periodicals, and scrapbooks documenting the club’s history, and artifacts such as the slender black baton Charlotte Mulligan once used to lead her youthful orchestras.

The adjoining Music Room was designed by Mrs. Glenny, president of the club during the turn of the century, who painted a series of murals mounted on the walls above the wainscoting. The murals are said to depict the Seven Ages of Woman and feature cherubs, angels, women in long billowing gowns gathering flowers, flying bluebirds, and ladies in a garden with children. Another woman holds a long garland ribbon with a Latin inscription that translates as “The work which was undertaken from love has now been finished with joy.” This was the mural’s final panel, hung in 1920. Once the scene of musicales, the Music Room is now used for conversation and entertaining.

From its inception, the Twentieth Century Club presented leading musical artists from the U.S. and abroad in recital and concert programs. Violinists, pianists, operatic singers, string quartets, and even a ballet master with the Imperial Russian Ballet have all appeared at the club. In 1941, violinist Isaac Stern played the first Buffalo performance of a new Vaughn Williams concerto.

In 1905, Green and Wicks was called in again, this time to tear down the old church building in the rear and build a new one in its place. The central feature of this building was a splendid new ballroom that opened off the music room on the second floor, with a gymnasium and pool on the level below. Membership grew to 350 as the club offered classes and private lessons in swimming, dancing, fencing, badminton, and bridge.

After a fire destroyed the ballroom in 1923, the club replaced it with a smaller dining room with loggias on the two open sides. Today, where the casement-windowed loggias converge, French doors open onto a wide curving staircase that descends to the walled garden. The garden came into existence in the early ‘30s and was designed by the architect Harold LeRoy Olmsted. It rises gently to a fountain pool attended by a statue of Ceres, Roman goddess of the growth of plants. Beneath classical balustrades, the fountain is flanked by slate steps ascending to an English garden bench reposing under the curved boughs of a juniper. One path meanders under a tall hickory surrounded by pachysandra, ferns, and hostas, and the other leads to the curved iron garden gate set into a tall stucco wall. Almost all of the planning and work of the garden has been accomplished by garden committee members and a volunteer husbands’ auxiliary responsible for the heavy lifting.

Of course it is not always idyllic at the Twentieth Century Club. Fire struck again—twice in the past 40 years—but both times the Club escaped relatively unscathed. In 1961, the club’s next door neighbor to the north, Temple Beth Zion, was completely destroyed, yet the club suffered only relatively minor damage. The last blaze occurred in 1996 when a jealous boyfriend set fire to the mansion on the south side of the club and nearly destroyed it. Again, the Twentieth Century Club sustained only damage from water and smoke.

In addition to club activities such as book clubs, whist and bridge clubs, dance lessons, lectures, luncheons, and musicales, the women of the Twentieth Century Club have traditionally set to work when the nation called. Members rallied to the support of the troops by selling remarkable numbers of bonds during both world wars. In the World War II years, the club sold over a million dollars worth of bonds, sewed hospital garments, and made surgical dressings for the wounded.

According to Mrs. B., club historian, the Twentieth Century Club is the second oldest women’s club in the country, after the Acorn Club in Philadelphia. Mrs. N., club president, points out that although some things at the club inevitably change, certain traditions are respected in order to preserve the threads of continuity that distinguish the Twentieth Century Club experience. At the Wednesday speakers’ luncheons, for example, members of the sponsoring committee still wear white gloves when greeting club members and the president still entertains the speaker and members of the committee in the private dining room. Recent speakers at the Wednesday luncheons have included Lauren Belfer, author of City of Light and William G. Gregory, Lockport-born astronaut.

A friend once remarked while we strolled down Delaware Avenue that Buffalo was “a city built by giants and inherited by pygmies.” Presumably he was not including present company among the excoriated but was referring to those hacks and pinheads of exalted rank and diminutive vision who squandered much of the rare architectural legacy and urbane civility of the city in the name of progress and efficiency. At the Twentieth Century Club, however, the true heirs to the giants are alive and well and wearing lovely floral frocks and smartly tailored suits.

As for changing the name of the club to coincide with the new century, there has been some talk of simply calling it the Century Club. But for most members, that seems rather silly. After all, the name worked perfectly well in two centuries, why not a third?